Skerples has kicked off a community project: a giant train, each carriage essentially being a new room in a dungeon.

Here's my Lilliput inspired room. PCs can interact with these tiny people, becoming their heroes or destroyers. You can even take some with you, and use them as tiny spies! They sky's the limit.
Posted by lc_ at 12:24 PM No comments:

I like separate Race and Class, sue me. This is probably compatible with most OSR systems, though I wrote it with the GLOG in mind. 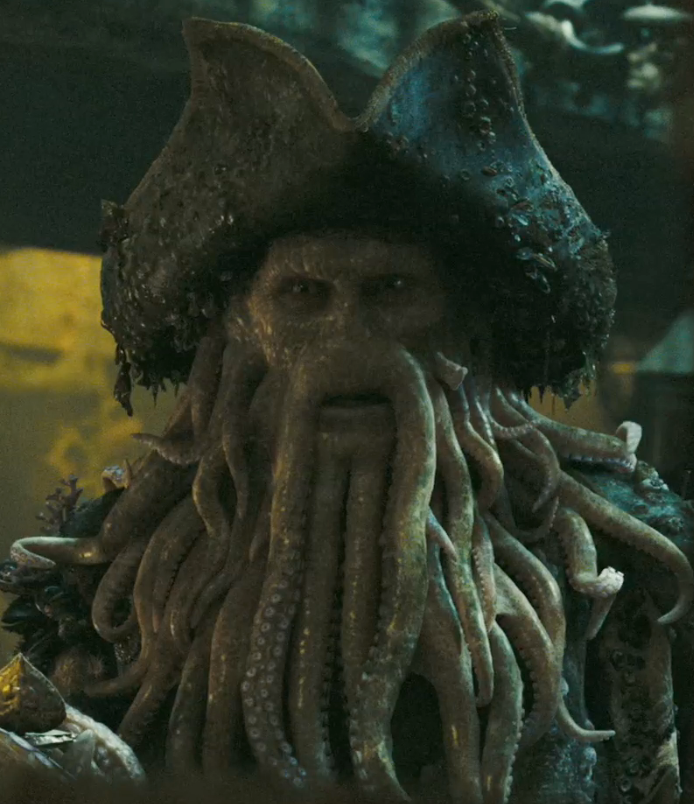 Cephaloids are human-sized octopuses, which can maintain a vaguely humanoid shape. They lack a humanoid body, supporting themselves on most of their tentacles in a column, leaving two free for limbs. On land, they often wear baggy hooded robes. They can breathe both air and water, and can swim incredibly fast.

Culturally, I see them as a sort of exploratory scholar—think Indiana Jones, but an octopus. They're capable of traversing land and sea, their climbing ability benefiting the former and their swimming ability the latter. They aren't however, without their weaknesses. Cephaloids are somewhat squishy as a species (quite literally), and are reliant on water to stay refreshed. You probably won't see many in the desert.

This, but with an octopus head

Have you ever been exiting a dungeon, but just had too much money weighing you down? Do you have a lot of copper pieces, and wish you could have a lesser amount of silver pieces that still are worth the same? Well I’ve got a spell for you!

Make Change
R: 10: T: coinage valued up to [sum] gp D: permanent
You magically transform one denomination of coinage into another with equivalent value. For example, you can transform 2gp into 200cp, or 200cp into 1gp, 6sp, and 4cp. You can only perform this exchange within the denominations of one type of currency (you can’t change wampum into gold, or vice-versa, for example).
That’s for the GLOG, but you can probably convert it to any OSR game with ease.
Here’s a 5e version I made a while ago. Probably needs some cleaning up.

This spell, in its current format, is purely utility. You can turn all the money weighing you down, into smaller denominations that weigh you down less. I’ve limited it to only the omnipresent fantasy coinage, and only within that coinage, because weird stuff might happen exchanging between different types of currencies (Sure, you can exchange cowry shells into gold, that doesn’t seem too far-fetched. But you could also manipulate the exchange rate of the two currencies to just print money). There’s also the question of what counts as money. Could you turn old-school banknotes into gold? How about cattle, if people use them to barter? My version of the spell is limited to avoid this, but if you want to really open the can of worms that is exchange rates, be my guest. 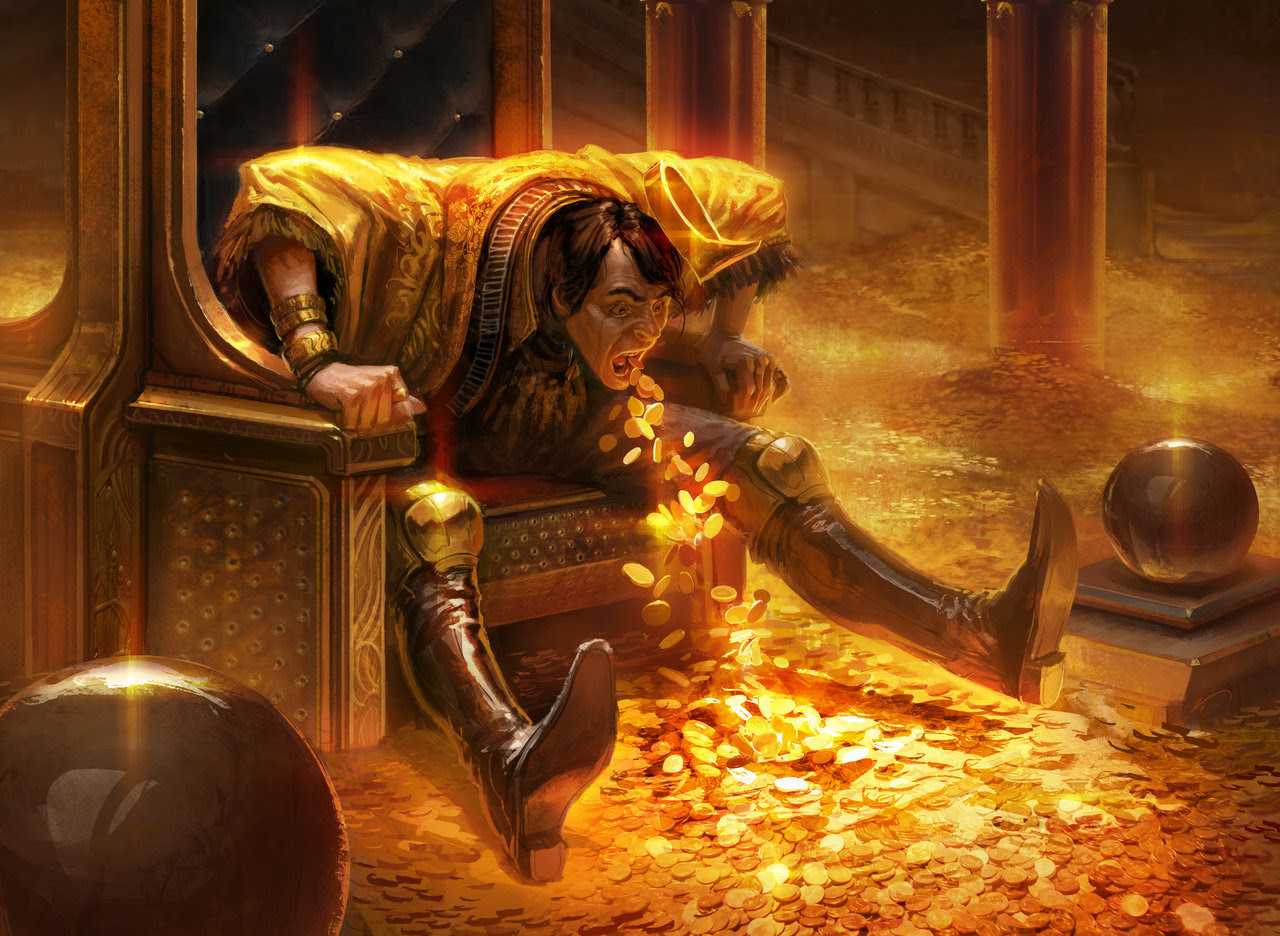 The Stone of Rand appears to be a fist sized, slightly oblong stone, a deep reflective black in color. In reality, it’s the physical form of a demon of greed. Upon touching the stone to an object and speaking the command phrase (Greed is good) it transforms said object into the amount of money the object was worth. It can only convert like, 20’ at a time, so you can’t destroy an entire building with it in one go. But you can punch holes in walls, turning them into coins. You can use the stone on prized works of art, stealing them while cutting out the need for a fence. Soon, this won’t be enough. Tell me, what’s the price of a human soul?
The Stone is cursed, obviously. The wielder is magically compelled to keep it on their person at all times (the bond can be broken with a remove curse, if you’re boring). The demon forced into this form isn’t a big fan of its current predicament, and requires payment to sate its hunger. The first day of having the stone, the demon requires only 1cp. The second day, it requires 2cp. The third day, 4cp. You can probably see where this is going; by day 31, the stone requires over 10 million gp. Failing to pay the dept any day causes the stone to immediately perform its magic on the wielder, turning them into coins and feasting upon them. The demon does this because it wants freedom; after it absorbs 9^99 gp worth of coins, it gets its original form back.

Give this item to villains who are making bank, but with a time limit. Give it to heroes if you want to see them ruin their lives.


I'm envisioning the effect to look like that one Skittles ad.

Thieves are a design challenge: how do you make them distinct from other classes and interesting to play, while also allowing other classes to be sneaky backstabbers? In their playtesting of the GLOG, Skerples has run into this same dilemma, with regards to the Thief class. I've come up with my own version, based heavily on theirs. I've italicized the changes in my version.

You gain +1 Stealth for each Thief template you possess.

Quick Draw
You have 3 additional Fast Inventory slots (Slots 1-6 can be accessed instantly).

Lucky
Once per day you can reroll one of your d20 rolls, or a single Skill test (you choose either value). Alternatively, you can make an attack that would hit you miss.

Opportunist
Whenever you get a situational bonus to an Attack roll (surprise, elevation, etc) you deal an additional +1d6 Damage.

Very Lucky
You get an additional use of your Lucky ability once per day. An adjacent ally can use one of your rerolls, provided you could have plausibly assisted them.

Great Escape
Once per day, you can automatically escape from something that is restraining you and that you could plausibly escape from. This includes grapples, lynchings, and awkward social situations, but not sealed coffins.

My concept of Thieves are that they are 1) lucky and 2) lateral thinkers. On the luck front, I didn't do much. The ability to avoid a hit with the Lucky ability improves survivability, and brings to mind impossible dodges and the like that we see in popular fiction. My greatest change addition is on the lateral thinking side. Unlike a Wizard who can just directly stop enemies in their tracks, Thieves have to find out how to use mundane objects to achieve results. The Unlabeled Package ability already helps facilitate this, but it doesn't have much use on the fly. Giving Thieves additional Fast Inventory slots gives them a unique mechanical identity; while Fighters and Barbarians can attack more than once per round, Thieves can quickly access their pockets. With these additional inventory slots (3 extra might be too many, requires playtesting), your Thief can always have caltrops on hand, ready to use. They can keep an Unlabeled Package always ready to open at a moment's notice, while still having room for weapons.